Demonstrating Feasibility of Group-Level Rewards in a Toy Model

Why Specifying group objectives is powerful

One of the key advantages of deep reinforcement learning over explicit, or hand-coded, behavioral design (for e.g. agent-based modeling) is the ability to specify abstract objectives such as winning a game or solving a maze. It’s often advised to design reward functions based on the desired ultimate outcomes, as opposed to rewarding behaviors or subtasks you think may lead to those outcomes.

In a similar vein, I suspected that it might be possible to administer abstract group-level rewards in a multi-agent reinforcement learning scenario. Understanding how to do so could be immensely powerful for two reasons:

To illustrate the second point, consider the group task of building a pyramid brick by brick. Assume each agent has the ability to pick up, move, and then place a brick in a 3D environment. You could imagine constructing some metric of success in terms of the geometry of the structure built. However, it is not at all clear what a given agent (with only locally available information) should be observing. Nor is it clear what types of actions to reward if you are doing reward shaping.

Is the notion of a “Group-level reward” possible in practice?

I define a group-level reward as a reward which is computed and triggered as a function of the group’s holistic state, as opposed to the state or action of any one particular agent in a multi-agent deep reinforcement learning setting. The indirect nature of this kind of reward signal makes it seem implausible that it could lead to any useful learned behaviors. In the pyramid construction example, the group reward could be a function of the squareness of the base and the triangularity of the sides, and it could be delivered (to all agents simultaneously) at either regular intervals or when some dramatic improvement was made. This doesn’t seem like it could work. At any given time there may be several agents who are not doing any actions in favor of the group objective. Why then would you reinforce those un-helpful actions?

In this project I show that agents can learn to act towards group objectives when the reward signal received is only peripherally related via group-level outcomes.

The important thing to note is that the reward is not triggered as a direct result of any particular condition satisfied by the agent. It is delivered automatically each time step.

I tested 3 types of observations. These are each fundamentally different types of information that an agent can use to decide an action. My goal was to determine which of these leads to the best performance.

The model is trained with PPO using Unity’s ML-Agents kit. You can find my repository here 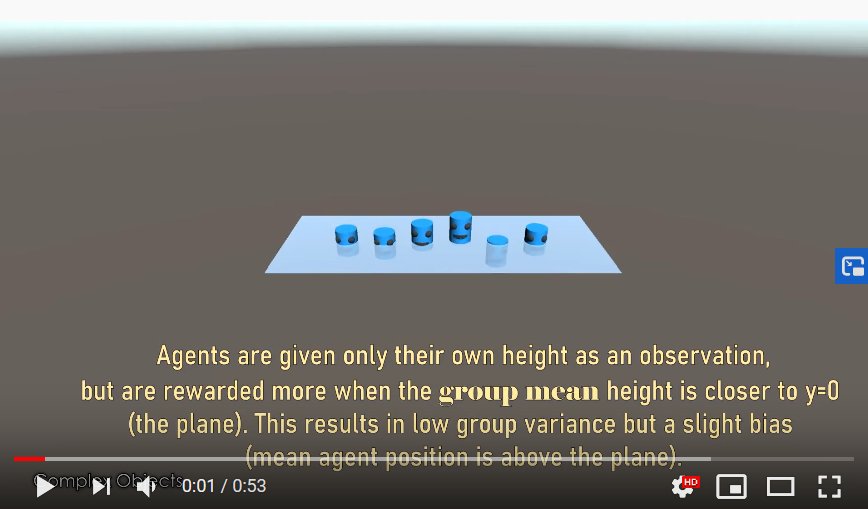 The impact of observation type 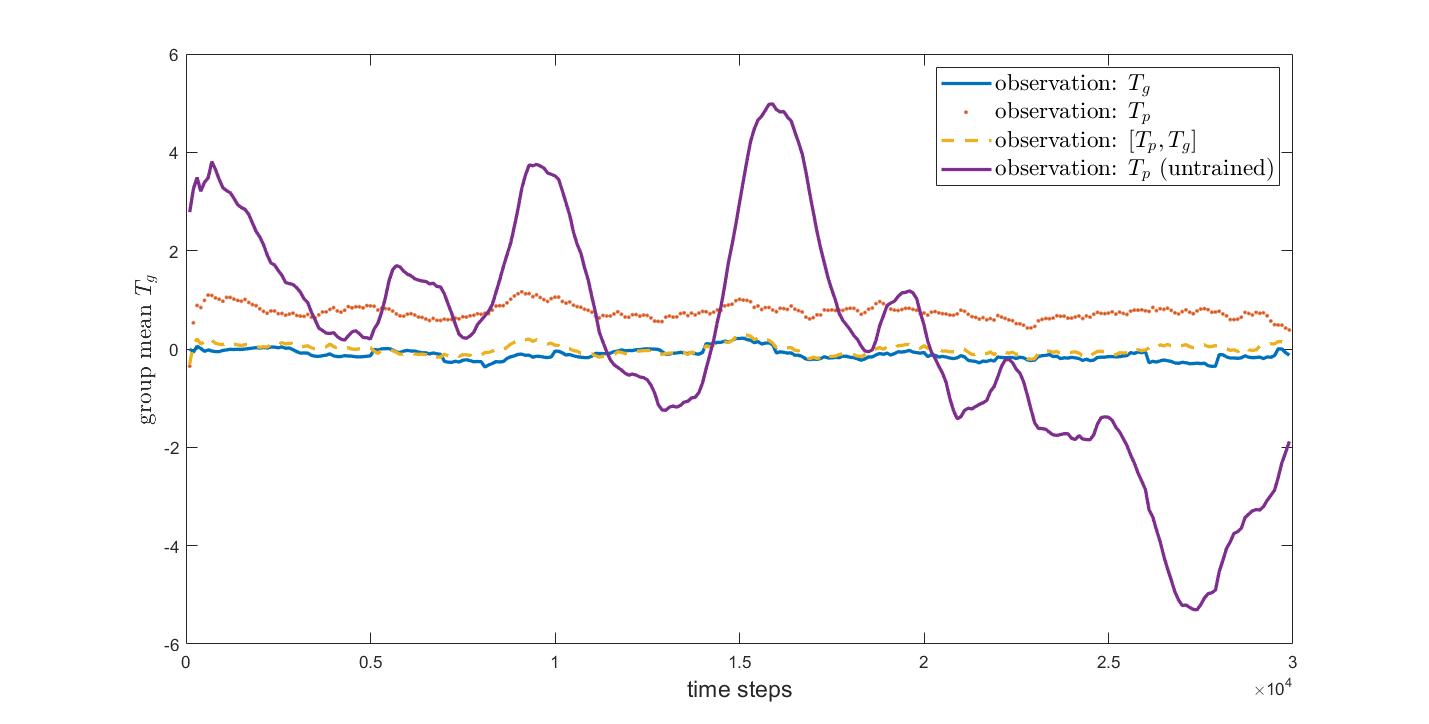 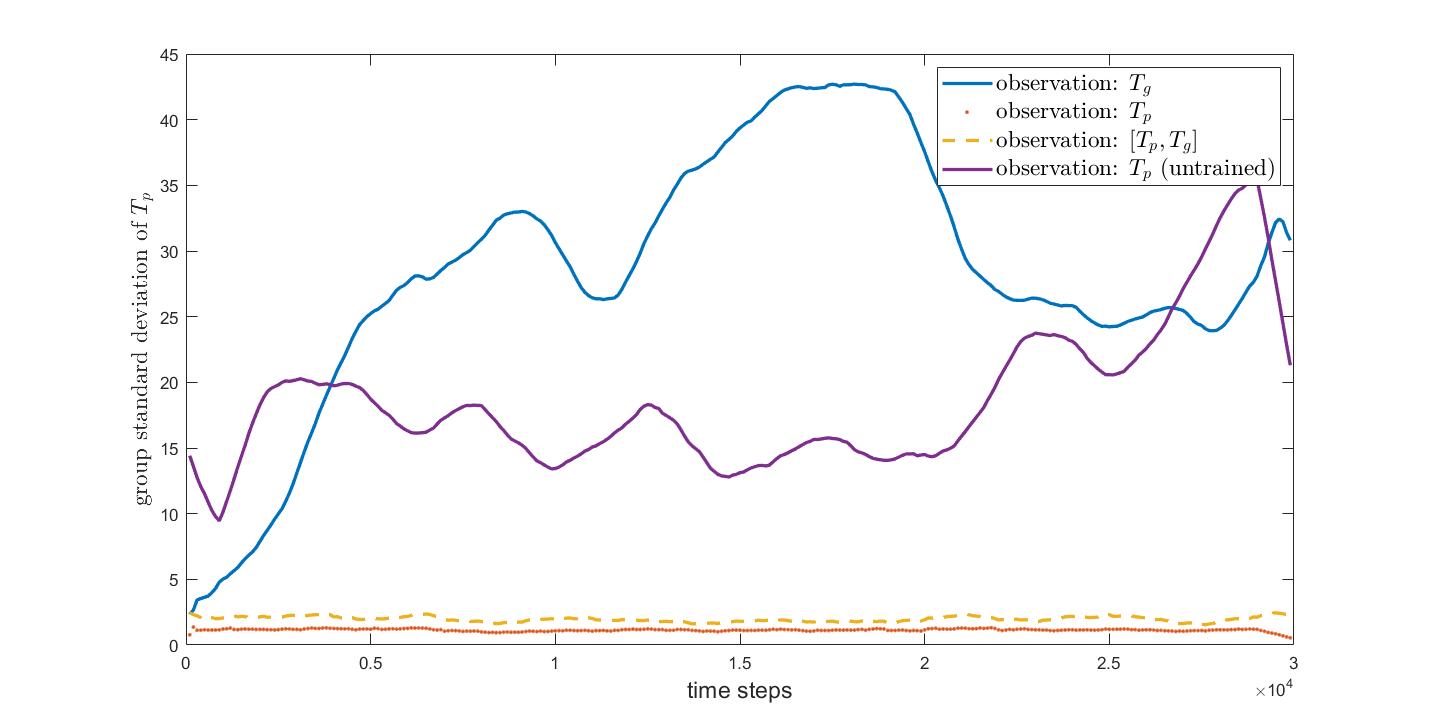 I have demonstrated that agents in a simple multiagent RL setting can learn beneficial actions from a reward signal that is delivered only on the basis of group-level outcomes. Agents in this problem setting must effectively learn by by proxy in that they are rewarded when other group members have done useful actions. Many actions having little to do with the group objective inevitably end up being rewarded and thus reinforced. Over the course of training, this source of error was apparently overcome. This opens the possibility of extending the technique of group-level rewards or rewards-by-proxy to more complex group objectives.

The result on the choice of observation space demonstrates that a kind of bias-variance tradeoff can emerge if each agent’s \(T_p(t)\) is seen as a predictor of the target temperature. I found that providing information on both one’s own state (individual level) and the group state allowed the group to stabilize its mean about an accurate temperature (i.e. near \(T_0\)) while its individual members had minimal variance.